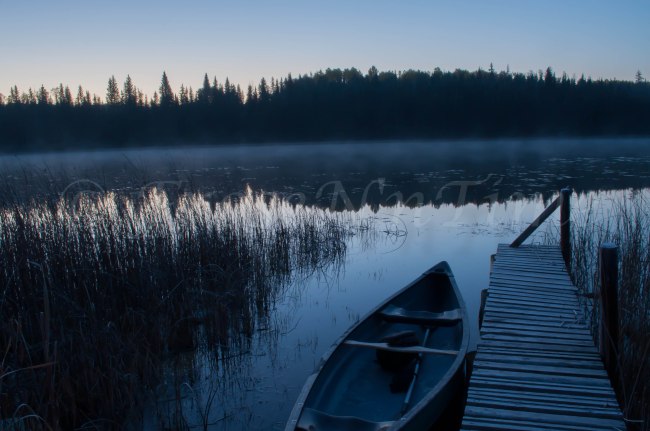 It’s been two weeks since I lost my photography equipment to the icy waters of British Columbia.

Two weeks since I went for a surprise swim in the Canadian lake that was already seeing winter bite its shores.

Did I ever mention that I can’t really swim?

No, that’s not quite true.  When it comes to fancy breaststrokes, butterflies, and mermaids I might as well be a waterlogged cat.  Ask me to doggie paddle and you’re on!

I walked out under a light velvet night, my shoes crunching over frosted grass.  Breathing in the crisp October air I could taste the coming of winter to British Columbia’s mountains.  The world was still cast in shadows and the stars were just beginning to fade from the whispers of the coming sun.  The lake was a mirror under swirling mist and shadowed twins of the pines lining the shore.

There was no sound.

In the early morning chill, not even the crickets protested the silence.

My dad stood out in the cold, his hands buried deep in his heavy gray coat, his breath billowing clouds in the dark morning.

“I’m going to take the canoe out on the lake for sunrise.”

His eyes called me crazy when I invited him along.

“Don’t drown,” he told me, helping me drag the narrow canoe along the dock.

We could hear the hushed cracking of ice as it cut through the thin layer gathered along the edges of the lake.

“I promise I won’t drown,” I told him with a laugh.

He knew I was experienced with canoes.  A few years back we had even taken ours for a two-day trek down the Susquehanna River with a pack of camping gear and an over-excited dog jumping from side to side.

I had been itching to take the canoe out more often and I intended to take advantage of the opportunity now.

He was standing on the dock when I pushed off, the green tip cutting through the mirrored sky casting gentle ripples over the stillness.

There’s something about the pure beauty of life just before sunrise.  It’s as if the world holds its breath for the coming of our star.  The night bows its head and the canopy of glittering diamonds give way to the sun as she rises and captures the day.

I sat as still as I could, watching the ripples break the glassy sky passing on either side of the canoe.  With every pull of the paddle a small stream of water would leap back into lake and leave icy tears down the metal pole, freezing my gloves to its surface.

I caught my breath as I drifted by a small beaver cutting its own dark streak through the lake as it set out for its morning work.  As soon as it realized what I was, it slipped down into its underwater home with a small splash. 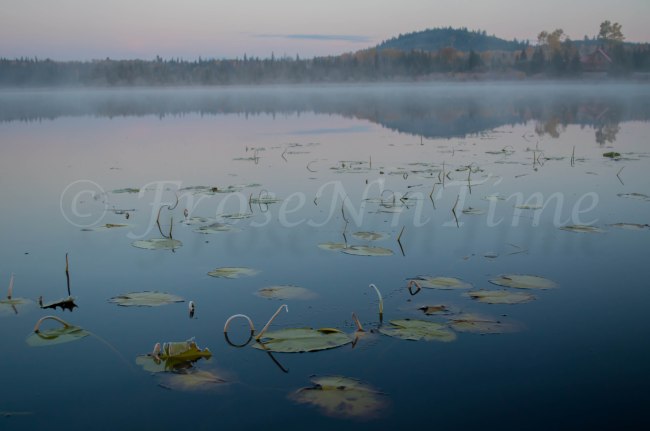 I snuggled down into my three layers and thick gloves that kept the ice and cold from my skin letting me enjoy the beauty around me.

The canoe slipped through frosted reeds and lily pads rocking over rippling dark forest pine.  The lake’s surface had faded to a pale blue with the dawn of day.  Even before the sun peaked its head over the treetops the aspen leaves were ablaze in yellow fire. 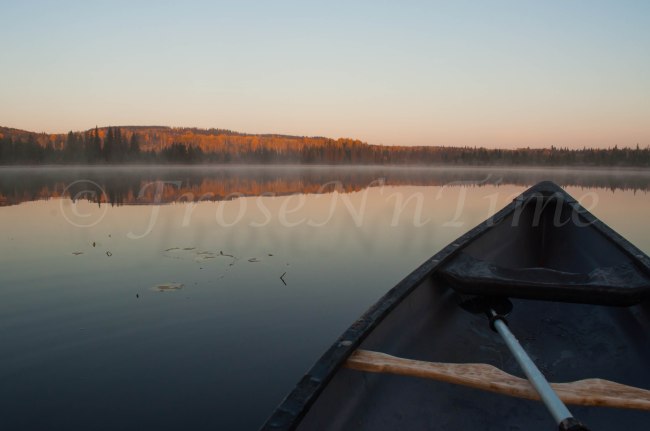 The mist swirled in the golden glow of morning light.  The aspen cast its fire into the deep forest pine of the water below.  I heard the clear song of the Whiskey Jack greet the dawn as I leaned to get a lower perspective of the morning on the lake.

I felt the canoe begin to tip too far to one side so I straightened up to keep it balanced as I did so many times in the past.

Except this time instead of the gentle bob of a canoe over calm waters I was suddenly free of gravity, my senses screamed in the shock of cold, my world plunged into darkness.

My first thought was: “Oh shit, my camera!”  I thrust my right arm up and out of the water as I tried to gain my feet.

This was quickly followed with the realization that all of my lenses had been in my camera bag with me.  I flipped the canoe and threw the waterlogged bag on the seat.  There was only about an inch or two of green sides bobbing above water, making it difficult to keep the camera and all of my lenses out of the lake even on the seat.

It was only then that the third thought came to me.

I tried to cup my arms into a makeshift bucket and scoop water out of the canoe as my mind went through everything I knew about hypothermia and capsized canoes.  I was already shivering violently and there was no way my leaky bucket could get enough water out to keep my weight from simply sending my mode of transportation to the bottom of the lake.

For one dull moment I wondered if I should try to swim across the length of the lake to the distant shore where the dock was.  In the end it was the October waters stealing my body heat and the thick sludge pressing against my calves that turned me toward the closer shore.

It took me a while to fight my way out of the two feet of muck that had trapped my feet and beat at the water in a three-limbed doggie paddle with the canoe in tow.

I was grateful that each time I found myself in potentially dangerous situations my mind seemed to automatically switch into logic mode.  Although I felt panic lapping at the surface of my mind I kept cool logic at the forefront.  I knew I had to get out of the water and my wet clothes and warm up.

First I had to get the canoe back in business.

Eventually I began cutting through lakeside reeds and was able to drag the canoe out far enough to dump as much water as I could.

There was no breeze when I had first pushed off of the far shore to enjoy a relaxing morning on the waters but now it seemed the icy winds of Siberia had torn down through the mountains.  My clothes were pouring out fishy water and my body shook uncontrollably.  I started pulling off the outer layers before climbing back into the canoe and aiming it toward the dock.

Even then, as my boots sloshed in the dark waters rocking with the rhythm of my paddling my photographic mind noticed the full light of day, the aspen aglow in golden brilliance, the mist shifting in dancing light.  I focused on the rhythm of paddling and bee lined back to the dock.

A flash of light caught my attention.  It looked like I wasn’t the only one noting the beauty of dawn.  There was my dad on the lake’s edge taking photographs of his daughter on a lake at sunrise.

I wander if he can tell I’m wet yet.

When I was within ear’s shot I shouted out “Well, I kept my promise.  I didn’t drown!”

He helped me pull the boat back in, then sent me up with my camera equipment to strip out of my saturated clothes and warm up.  At the thought of standing in the steaming waters of a hot shower nothing else seemed to matter.

It wasn’t until I had finally stopped shivering and was sitting on the floor of the shower when I remembered my five-pound, professional grade tripod that I had also taken out with me for some pre dawn shots from shore.

I groaned, recalling two years of conflict trying to convince myself to spend the extra money for the higher end tripod instead of going through two or three cheaper tripods and paying twice as much in the long run.  I had finally saved up enough money and with the advice from other professional photographers of “You only cry once” echoing in my mind I made my purchase.

And now it was buried under thick sludge.

When I came back down there was a hot breakfast waiting for me along with the rest of the gang.  The family running the ranch was fantastic, consoling me yet making me laugh as they christened “Tripod Lake” as the new name and bragged about all of the great “tripod fishing” they would have in the spring.  Jim, our wrangler, nodded as I explained what happened.  “Yeah, that canoe’s a roller,” he said as he told me a story of his own experience taking a chilly dip in the lake around the same time.

I’d be certain to keep that in mind next time I decided to go for a dip in the lake.

Actually, I had wanted to go back out on their lake for another series of sunrise shots or even to just relax, but in the end there were a few things that kept me from it.

My camera, sitting in a puddle of water, was one.

The other came a few hours after my morning swim when a…disagreement…with my horse landed me in the dirt with my arm sustaining most of the damage.

But that’s a story for another time.

For now as I sit under falling leaves of autumn and watch a deep red sun sink below the tree line I wonder how long it will take until the pain of my loss diminishes and my “adventure” becomes nothing more than a funny story to tell around the campfire.

As I leave the cloak of misery behind me I try to focus on the positive.

Something I have learned through my travels is that it forces you to take a potentially miserable situation and make it into something good.  In the end, what choice do we have?  We could focus on the negative and be depressed and let it influence the rest of our trip, or we could move forward and enjoy what we can, learning from the past (first purchase after I replace my equipment: waterproof bag!)

It’s not what happens to us, but how we react to it that makes us who we are.

I may not have my camera to capture the moments of life around me to share with the world, but I still have my words.

Just because I can’t capture the world around me in light doesn’t mean I can’t try to convey what I see and feel with ink.

Have you ever come face to face with a truly miserable experience while traveling?

How did you get through it?  What did you do?

2 thoughts on “A Chilly Morning in Tripod Lake”