It’s been a week now since stepping foot on Deutschland’s mossy wooded paths and beginning my two month explorations of its ancient lands and the culture of its people. So far my days have mostly consisted of settling in to my new, temporary home, running errands, and feeling a mixed desperation and eagerness to do as much research on potential adventures while not wanting to burn daylight doing so. Unfortunately, these last few months have not allowed time to prepare for this trip before my arrival and I find myself wishing for some rainy days to play catch up.

The first night, my relationship with Jetlag was the strongest. It had me lying awake in bed, pretending I was sleeping, while listening to the sounds around me.

Then the moon rose.

Its midnight light lit up a path leading me outside into its silver world. I walked the night streets of Weilerbach, passing quaint traditional German style homes until I found a path leading back behind the line of houses to a small duck pond. I stepped in slow, careful steps, listening to the hushed sounds of sleeping ducks. The moon glittered over the still surface in puddles between a blanket of lily pads. I followed the trail around the duck pond and sat at the water’s edge, enjoying the quiet sounds of the slumbering nocturnal chorus around me.

I knew it couldn’t last. Eventually, I would have to break my bond with Jetlag to keep it from its needy visits during the daylight hours. With a deep breath of fresh, midnight air, I began to follow the silver path back to my bed.

But from that night on it was the moon and her silver glow that accompanied me to sleep.

In the morning, I took a different path and explored the waking streets of the same, small town. I was amazed to find that most homes have very meticulous, beautiful gardens. Roses climb the walls of many homes while fruit trees produce fresh pears and apples. Plots are neatly maintained for a variety of vegetables and herbs and the owners can be found digging in the dirt and watering their plants daily, sometimes more often.

There was one thing, however, that proudly climbed arches and walls in almost every home. 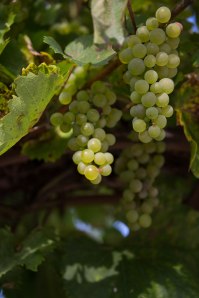 September is the time of wine. And the Germans were ready. Rows upon rows of vines laden with these plump, sweet fruits cover the slopes and fields of Germany and it seemed many locals were ready with their own home grown variety for their own version of moonshine.

There are many cultural differences between the “New World” culture and the much older world of Europe. However, despite this, there’s a sort of comfort that welcomes me to these rolling hills and cozy villages. I’ve still only caught a glimpse into the German culture and am eager to continue exploring.

1 thought on “Willkommen in Deutschland!”